Here is a good show from the European tour of 1994, the famous "blackout" show where Blur lost power onstage after the opening string of numbers! A unique event...enjoy!

Here's an early show, from 1991, in Damon, Graham, and Dave's hometown. The sound quality is not great but it's acceptable for a 20 year old audience tape. The show is a gem, though. Enjoy!

http://www.megaupload.com/?d=NVTDJAGX
Posted by Drew at 7:20 AM No comments: 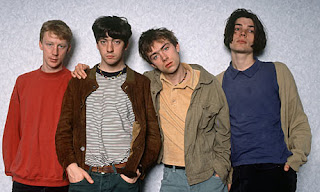 In 1991, Blur made their first trip to America and undertook a short US tour to promote Leisure and the modest success of There's No Other Way. The little jaunt consisted of four known dates, with more likely in between November 1st and 10th. The known tour dates are below:

The available recordings are highlighted, and it is not known at this time if any others exist.

The set lists for the two shows (which were considerably different) are:

As you can see, in addition to the material from Leisure, some new songs were played (Oily Water, Turn It Up, Popscene), and the second show has a rare live version of I'm All Over. Both of these are very nice to listen to (the Los Angeles show can already be found on BLAAP HERE, while I will try to get the Chicago show up soon).

What makes 1991 an interesting year in the history of Blur is that, not only were they on the rise in the UK with their debut album and the success of There's No Other Way, but they were starting to gain momentum in the USA. Sadly, this was to come to a screeching halt in both countries in 1992 with the poor chart performance of Popscene, conflicts with their record company in the UK (Food Records), the ineptitude of their US record company (SBK). And perhaps the two biggest factors that hardened and sharpened Blur's resolve in late 1992: their escalating drinking, and the disastrous US tour of 1992 (for more on this, go HERE). But at this point in 1991, the sky seemed to be the limit for the ascendant Blur. And you can feel that coming through in these performances...hopefully more information on the other tour dates will come to light, as well as some new recordings to analyze this period in their history.

And as always, if you have any additional recordings or know someone who does, please contact me privately.
Posted by Drew at 6:53 AM No comments:

One of only a few warm-up shows Blur played before Think Tank was released, this is the only one available. It's an interesting show for two reasons: the band is surprised the crowd knows the songs before the album was out, and Alex couldn't make it to the USA due to visa issues, so Chris Traynor fills in on bass! A weird gig, but an enjoyable one...hope you like it!

Here is one of only two known recordings from Blur's sole Australian tour in 1997. This is an excellent quality soundboard recording, and the show is one of the best from 1997. Enjoy this one, and turn it up loud!! During the insanely busy year of 1994, Blur played all over the world from April until the end of November. Starting right after their Fall US Tour and being immediately followed by their Japanese tour in November, they did some heavy touring in Europe during October and November, including a whole host of dates in France. The tour dates are below (and the available recordings are in bold font):

Of the available recordings, the Paris, Copenhagen, and Oslo ones are uncirculated although I am working on getting copies of them. The general set list for the tour is below:

As you can see, nothing too surprising, as it draws heavily from Parklife and Modern Life is Rubbish, with only a single nod to Leisure. They were also at this time previewing Mr. Robinson's Quango from the forthcoming Great Escape album (they had started playing it earlier in 1994) and would throw in a short instrumental version of Ernold Same as well, from time to time.

While these shows were generally solid, you can definitely hear the fatigue come through. This is especially true as the concerts go on...they tend to start out well, get sluggish by the middle, and then mostly recover by the end. It's understandable, as by this time they'd been on the road a solid 6 months and still had a considerable Japanese jaunt planned for a week after this tour ended. However, the Japanese shows were some of their best, most frenzied of the tour (and of their career...read about them HERE).

All in all, while the recordings from this tour don't contain Blur's best shows, they're solid and worth checking out, despite the lack of surprises in the set lists or performances. If anyone was at any of these shows (and even if you weren't), share some feedback in the comments section!

And of course, if you have any recordings from this tour (or any others), please contact me privately.
Posted by Drew at 9:40 AM 4 comments:

Here is a GREAT sounding concert from Blur's mini-tour of Latin and South America (for more info on it, go HERE). This includes rare post-1997 versions of Country House, Stereotypes, and On Your Own...a great show. Enjoy!

JUST TO LET ALL THE UK BLUR FANS KNOW:

Black Book is *FINALLY* available on Amazon.co.uk, for 12 quid:

I know some of you have contacted me saying you wanted a copy but didn't want to buy if from the US Amazon...well, now you can get it from the UK!

It is also available from Amazon.fr (France), Amazon.de (Germany), Amazon.ca (Canada), and Amazon.jp (Japan)
Posted by Drew at 1:01 PM 4 comments:

Here is Blur's 1997 show in Iceland, to accompany the preceding article. Compare and contrast this concert with the 1996 show. Still, enjoyable and worth having. Enjoy!

http://www.megaupload.com/?d=KCWMK4WX
Posted by Drew at 9:08 AM No comments:

Here is Blur's show from Iceland in 1996, to accompany the preceding article. Enjoy this rare and excellent Blur concert!

http://www.megaupload.com/?d=IKTCHXTZ
Posted by Drew at 9:04 AM 2 comments:

CONCERT REVIEWS: Blur in Iceland (and beyond)

In 1996, after finishing off their touring obligations with some festival appearances in the summer (see THIS POST) and debuting a couple of new songs (Song 2, Chinese Bombs), Blur retreated into the studio to continue working on their musical reinvention. During this time Damon became enamored with the country of Iceland, so much so that he invested in a pub there and invited the band up for some recording. During this period, in the fall of 1996, Blur played a one-off show, on September 8, 1996 (the poster is courtesy Bjorn Halldorsson) 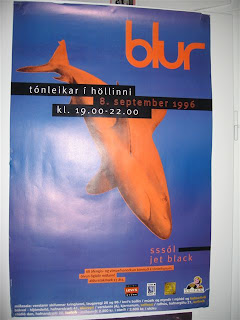 The concert was held at the Laugardalsholl in Reykjavik, Iceland on September 8, 1996 and the set list was:

That is a great set list! First, they start off with Stereotypes, which is very unusual. The set includes rare (for 1996) performances of Sing, For Tomorrow, and the last Country House for a while. PLUS, two new songs were debuted: the very first live performances of Beetlebum and Look Inside America. Song 2 was also played (Chinese Bombs, debuted during the summer, is absent). Beetlebum sounds tentative but fully formed, although it's the first time Damon ever played guitar onstage and he warns the crowd beforehand! Look Inside America again sounds timid but complete, while Song 2 has slightly different lyrics than the versions from the summer of 1996, but is closer to the final version. A great concert. The anonymity Iceland offered, far from the roving eyes of the UK media, as well as the welcoming nature of the people that Blur found there, let them stretch out both in the studio and onstage to be more daring, and the results, again both on record and stage, were staggering.

This 1996 adventure stands in stark contrast with the show Blur played in Iceland at the same venue in 1997, on August 31, 1997 (poster courtesy of Bjorn again): 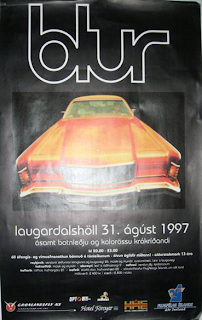 It was part of Blur's mini-tour of Iceland, Greenland, and the Faroe Islands, and is a much more somber, sloppy concert, supposedly because they found out Princess Diana had died that day. They took to the stage angry, sad, and very, very drunk. The set list was:

Beetlebum
M.O.R.
Movin' On
Stereotypes
Badhead
Country Sad Ballad Man
She's So High
To The End
Popscene
Chinese Bombs
Advert
Coping
Girls & Boys
Death Of A Party
The Universal
Theme From Retro
On Your Own
Parklife
Country House
I'm Just A Killer For Your Love
Song 2

Only the songs in bold font are available on recording. Bjorn and I are working on getting the complete show. Country House was played (surprisingly, it made a brief comeback in August 1997, as evidenced on the available V97 recording, which you can also download HERE). Overall, the band sound subdued, depressed, and bored, as if they want to get the concert over with and get off stage as quickly as possible. Still, it's a fascinating listen, and mediocre Blur is still better than no Blur at all!

The following posts will be the recordings of these two shows for your enjoyment. Please leave feedback!
Posted by Drew at 5:39 PM 5 comments:

Something nice coming up... ...just as I promised last week. I am working on a post about Blur's shows in Iceland in 1996 and 1997. I am finally going to get really cracking on it, thanks to my friend Bjorn from Iceland who has kindly supplied some excellent photos and memorabilia to go along with the post (I'll also include the recordings). Bear with me as I work on it (sadly, this isn't my full time job...I need to support my family somehow!) but I hope it'll be worth the wait!
Posted by Drew at 5:28 PM No comments:

So if you haven't yet, pop on over to Facebook and become a fan to keep up with any updates about the book and the site!
Posted by Drew at 3:01 PM 2 comments:

I've gone through and labeled all of the show downloads by year, so now if you want to see what's available, you can just go to the righthand side of the page and click on the year (1990 through 2009) and it will take you to the shows. Why didn't I think of this sooner?
Posted by Drew at 2:55 PM 2 comments:

No, not the kind that comes from Graham's guitar, although that's great, too. But I love getting feedback from all of you who frequent this site, and new visitors, too! Please leave comments with suggestions, critiques, comments, Blur memories, anything! That's how interesting discussions start, and it helps me to make this a better site for everyone!

Here's Blur's show from Portland during their second US tour of 1997 in June. A great show with a great set list.

http://www.megaupload.com/?d=TKUBX0MT
Posted by Drew at 8:22 AM No comments: