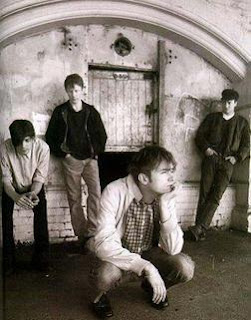 Perhaps no tour in Blur's history is as legendary or pivotal as their grueling 1992 slog across America. Traversing the entire country over three months, playing 44 shows, and spending nearly all of the offstage time getting blind drunk cooped up together on a tour bus rolling endless miles up, the band literally beat the hell out of each other and everything around them. It nearly broke the band up and depressed them so much that it led to the nadir of their then-young career at the (in)famous NME Gimme Shelter gig in July of 1992 (but that's a topic for another post).

Touring with the Senseless Things with no new album to promote, the penniless Blur were basically forced into this tour to sell t-shirts and merchandise to pay off debts their first manager, Michael Collins, had racked up with his colossal mismanagement and financial shenanigans. The tour itinerary is below (available recordings are in bold) and it should be noted even the tour dates were lost in legend until some months ago when I was able to uncover many of them through dogged research (the picture was later completed with some assistance from a friend in high places who shall remain nameless!):

As you can see, only two gigs, surprisingly, are available from this tour. Both of them reveal a band that is drunk to the point of barely being able to speak, yet they still manage to deliver a show that combines erratic playing with moments of brilliance, mixed up with humor, menace, aggression, and everything in between. The typical set list (gleaned only from the two available tapes) was:

Forced to re-promote Leisure a year after its release and mixing in new material from the aborted second album (rejected by their record company), the set is an odd mix of old and new. It makes for interesting listening! (I have shared one of the gigs on here...check it out!)

For such an influential moment in the band's history, it is shocking to me that only two recordings are available. There must be more that exist and if they do I hope they surface for us to enjoy someday and to fill in the pieces of the puzzle for this tour. Of course, if you have any, contact me privately!
Posted by Drew at 10:15 AM