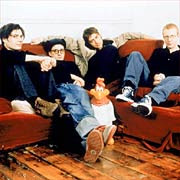 In November 1999, Blur undertook a short tour of Latin and South America, territories they had never played in before (and never would again). I remember hearing about this at the time and being excited they were going somewhere off the beaten path for a top British rock band. The tour dates and venues are below (those in bold font indicate that recordings are available):

Tender
Stereotypes
Bugman
Coffee & TV
End Of A Century
On Your Own
Popscene
Battle
B.L.U.R.E.M.I.
Trimm Trabb
No Distance Left To Run
Beetlebum
The Universal
Girls & Boys
Country House
There's No Other Way
Parklife
This Is A Low
Song 2

The interesting things, when looking at the set list, are that they brought back Stereotypes, which was a welcome addition, as well as Country House! Also, since the set lists were a mix of material (as opposed to playing all of the 13 album in order) gave the concerts toward the end of 1999 better flow. Another thing to notice is the rapturous response from the crowd, which borders on bedlam. Clearly, they were happy to have Blur there and embraced them completely. Luckily all three recordings we have are from the soundboard, so you can hear them in excellent quality.

The only complete recording from this tour is the final show, in Argentina. Fragments of the Mexico City and Sao Paulo shows exist as well. It is known that the Sao Paulo and Rio de Janeiro shows were films and presumably recorded in their entireties, tapes of those shows must exist. Additionally, a taper contacted me back in 1999 offering a copy of the Rio show in a trade. Of course, I sent my stuff and never heard from him again, but I'm sure of its existence. If anyone out there has copies of any of the Sao Paulo, Rio de Janeiro, or first Argentina shows, please contact me privately.

For anyone out there who was at any of these shows, how about sharing some thoughts and memories with us?
Posted by Drew at 3:14 PM