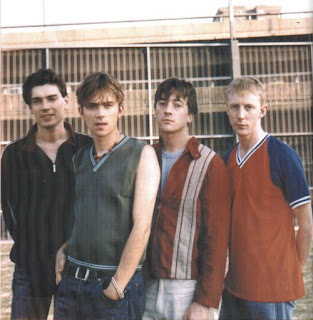 During the insanely busy year of 1994, Blur played all over the world from April until the end of November. Starting right after their Fall US Tour and being immediately followed by their Japanese tour in November, they did some heavy touring in Europe during October and November, including a whole host of dates in France. The tour dates are below (and the available recordings are in bold font):

Of the available recordings, the Paris, Copenhagen, and Oslo ones are uncirculated although I am working on getting copies of them. The general set list for the tour is below:

As you can see, nothing too surprising, as it draws heavily from Parklife and Modern Life is Rubbish, with only a single nod to Leisure. They were also at this time previewing Mr. Robinson's Quango from the forthcoming Great Escape album (they had started playing it earlier in 1994) and would throw in a short instrumental version of Ernold Same as well, from time to time.

While these shows were generally solid, you can definitely hear the fatigue come through. This is especially true as the concerts go on...they tend to start out well, get sluggish by the middle, and then mostly recover by the end. It's understandable, as by this time they'd been on the road a solid 6 months and still had a considerable Japanese jaunt planned for a week after this tour ended. However, the Japanese shows were some of their best, most frenzied of the tour (and of their career...read about them HERE).

All in all, while the recordings from this tour don't contain Blur's best shows, they're solid and worth checking out, despite the lack of surprises in the set lists or performances. If anyone was at any of these shows (and even if you weren't), share some feedback in the comments section!

And of course, if you have any recordings from this tour (or any others), please contact me privately.
Posted by Drew at 9:40 AM