Here is Blur's set from Glastonbury in 1998 to go along with the previous article. It takes two sources to patch together the entire show, which is why the sound changes for some songs. Not a perfect soundboard recording, but damn good and definitely worth it. 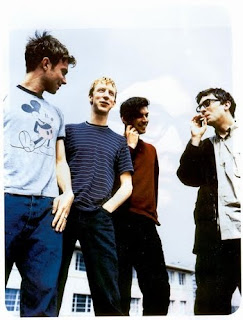 After the insane amount of touring Blur did up to and including 1997 (where the entire year was literally spent on the road), Blur took it easy in 1998. Their headlining slot at the Glastonbury festival was the only major gig of the year. To prep for it, they played three low-key warm-up shows (one of which was a fan-club only show). The tour dates (if you want to call it a tour!) are below. The available recordings are highlighted:

Recordings of every show apart from the first one in Reading are in hand and offer fascinating listening. (Damon and Graham also made an appearance at the Meltdown Festival in London in July, playing a set with Silver Apples...a recording of this also exists and is superb, even though it's not technically a Blur show).

The interesting thing is the set list they used for these shows...a real weirdo of a running order:

Girls & Boys
On Your Own
Beetlebum
End Of A Century
Country Sad Ballad Man
South Park (aka Freestyle aka Trailerpark)
Popscene
M.O.R.
There's No Other Way
Repetition
I'm Just A Killer For Your Love
Coping
For Tomorrow
This Is A Low
Parklife
The Universal
Death Of A Party
Essex Dogs
Song 2

So many strange things about the set, including Girls and Boys and On Your Own as openers, the revival of Repetition (which seems such an odd and random choice...the only previous live recordings are from the early 1990s Leisure-era shows), the live debut of Trailerpark (under a couple of working names, a year before it would appear on 13), and the first ever live performances of Essex Dogs. Now, while this is a great song (in my opinion, at least...I know many fans don't care for it at all), it was a rather strange choice to introduce into the set as an encore, especially at Glastonbury! However, it seems to have gone down really well, judging from the recordings.

An interesting thing to note is that the tapes of the Bath and Birmingham shows sound like the small club shows they were, with lots of intimate and humorous exchanges with the crowds. The band sound like they're having a blast and the crowd sounds like a non-stop party, just how you'd want a gig to be. By the time they get to Glastonbury, the band are constantly worrying about the crush of the crowd at the front and the abysmal weather conditions for the poor festival-goers (1998's festival was very muddy, wet, and unsanitary). They even stopped a song in the middle and threatened to leave the stage if things didn't settle down in front (during Country Sad Ballad Man). According to many accounts I've read, Blur were so appalled by the conditions of the festival that they vowed never to perform there again (and they didn't...until 2009, of course)!

All in all, even though the number of shows they played is quite small, they offer fascinating listening and act as a bridge between the headiness and success of touring the Blur album and the experimental era of 13.

By the way, if anyone has a copy of the Reading show, please contact me privately!
Posted by Drew at 9:09 PM 4 comments: 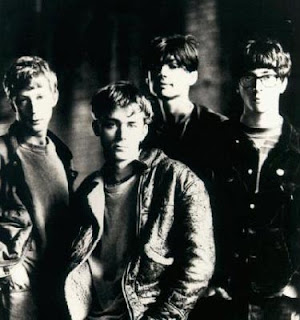 While 1989 and 1990 saw the young Blur touring sporadically, 1991 saw them settling into the grueling tour schedule they'd follow for the next 8 years (with the exception of 1998's lay-off). At this point they had three singles released (She's So High, There's No Other Way, and Bang), one of which brought them early fame (There's No Other Way, which reached #8 in the charts) and their first album, Leisure, which again was reviewed very favorably in the press. By the time the fall of 1991 came around, Blur were on a roll and touring heavily. The tour dates are below (available recordings are highlighted):

As you can see, this UK tour included a three-day jaunt to France to appear at a festival. The typical set list was:

In addition to playing the bulk of Leisure onstage, some new material was previewed as well during this period, including Popscene (which would be the next single) and Oily Water. More new songs would be added to the set in early 1992. It's also nice to hear great b-sides like Explain and Day Upon Day in the set, as these would disappear once 1992 rolled around and more songs that would eventually end up on Modern Life is Rubbish were added to the set.

Immediately after the final show in London, Blur headed to America for their first US tour...this UK tour sees them hitting their stride and playing with confidence, so much so that by the time they get to the USA, they're firing on all cylinders.

There are so many shows from this tour that are not only not available on recordings, but it's even unknown whether more exist. If they do, please contact me privately. It would be fascinating to piece together more from this tour, especially earlier on when it began!
Posted by Drew at 7:27 AM 10 comments:

I just want to update all of you who visit this here blog: things have been VERY busy in my life right now, but I hope to get some more articles written and posted, as well as more music! So stay tuned!
Posted by Drew at 8:16 AM 3 comments:

Here is Blur's final show of 1995 (and their third at Wembley in December 1995). The sound is pristine, and while the band sounds tired at times, this is still one of my favorite shows...a great one to listen to. This complete soundboard version is very rare, so I hope you all like it. Enjoy!

UPDATE: I've reuploaded it due to many requests and the fact that the original MegaUpload link is dead (as is MegaUpload!) 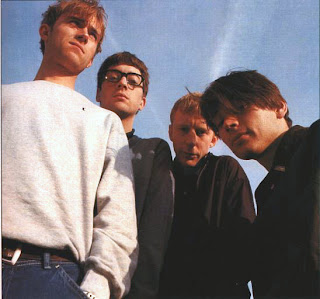 As they usually did in other years, in 1995 Blur toured Japan, where they always seem to play fantastic gigs (with some rare songs) in front of fanatical crowds. The tour was squeezed in between the end of their European tour in October and the beginning of their UK tour in late November/December. The tour dates are below (known and available recordings are highlighted):

The Osaka and Tokyo (Budokan) shows are in hand, while I am currently chasing down a lead for the Tokyo (NHK) show. The typical set list is:

The Great Escape
Charmless Man
Jubilee
Popscene
She's So High
End Of A Century
Tracy Jacks
Mr. Robinson's Quango
To The End
Fade Away
It Could Be You
Stereotypes
Girls & Boys
Chemical World
Advert
Bank Holiday
For Tomorrow
Country House
This Is A Low
Supa Shoppa
Yuko And Hiro
He Thought Of Cars
Parklife
Coping
Globe Alone
The Universal

In addition to being a long set with material from every album represented, these Japanese shows from 1995 contain the only known live performances of Yuko and Hiro, which is fitting! In addition, some material from The Great Escape was dropped in favor of some older material, making these set lists fascinating cross-sections of all of Blur's material to date (although Leisure was still underrepresented). The 1995 Japanese tour wasn't as wild, crazy, and spontaneous the 1994 one, nor as epic as the 1997 one, but it still has some excellent performances and is worth checking out. (Of course, if you have the Live at the Budokan album, you have most of that show, apart from a few missing songs...I will put the complete show up soon).

If anyone out there has the NHK hall show or any shows, please contact me privately.
Posted by Drew at 1:45 PM 6 comments: