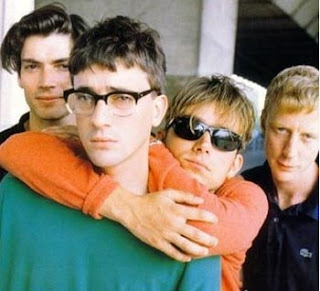 1996 was a strange year for Blur. They were still one of the top bands in British rock and were wildly popular. However, a press-led revisionist backlash against them (and in favor of Oasis) found them in the paradoxical situation of being massively popular with fans but not with critics. Even though The Great Escape (released in September 1995) was a #1 album and Album of the Year award winner, all of a sudden Blur were officially declared "uncool." However, they had to spend 1996 continuing the promotion of the album and its singles. A full year of touring in 1996 had initially been planned, but this was scaled back at the band's insistence to a US tour in the winter and a European tour in the spring. All members of the band have subsequently stated that had they been forced to tour all of 1996, the band would have blown apart.

However, after finishing the European tour, they threw themselves with gusto into the writing and recording of their next album, which would eventually unveil a radical shift in style and sound. Amidst all of this, they reconvened to play a handful of festival shows in the summer of 1996. The dates and venues are listed below (with available recordings in bold font):

What's really great about the recordings we do have are the set lists:

Stereotypes
Tracy Jacks
Charmless Man
It Could Be You
End of a Century
Jubilee
Chinese Bombs
Mr. Robinson’s Quango
Niteklub (w/Terry Hall)
Popscene
Globe Alone
Bank Holiday
This is a Low
Song 2
Girls and Boys
Country House
He Thought of Cars
For Tomorrow
There’s No Other Way
My Sharona
To the End
Parklife
The Universal

Besides the great variety in the set (they were still even playing Country House at this juncture!) are the rarities, including Niteklub (with Terry Hall joining for vocals) and the live debuts of Chinese Bombs and Song 2, both with different lyrics. In fact, Song 2 has slightly different lyrics just between these two gigs!

Followed in September by the Icelandic gig (which I will review at a later date), these shows capture Blur in transition from their BritPop heyday on the way to their more lo-fi and experimental phase, which would take the world by storm in 1997 with Blur and reach its logical conclusion with 1999's 13. These are fascinating portraits of a band blending old and new into something even more exciting than before!

I don't know of the definite existence of any of the other summer 1996 festival shows but would surely love to get copies of any if they do exist. If you have them or know someone who does, please contact me privately!
Posted by Drew at 12:33 PM