ATTENTION: Today is the day I had set as the deadline for anything to be included in the book. So if you have anything (recordings, ticket stubs) you'd like to be added to the book, please contact me/send it in by the end of today. In all honesty, if there's something anyone has after today, I'll still accept submissions but I'd prefer today be the cut-off day in order to give me enough time to finish the editing and formats. 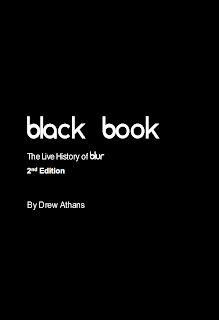 Here's the finalized cover for the new book. Looks familiar, no? I still like it...hope you do, too!
Posted by Drew at 9:19 PM No comments:

1 week down, 3 weeks to go. Make sure you don't miss out if you want to get a signed copy of the new book complete with a bonus 2 CDR compilation of live tracks! Just place your order below and you'll be all set.

So far the response has been tremendous and I think you all are going to really like this.

(and because some people have asked, the price already includes the shipping cost so no need to pay extra)
Posted by Drew at 12:53 PM No comments:

Black Book Pre-Order: IT IS HERE!

Getting Ready and Tying Up Loose Ends: The Preorder Opens Tomorrow!

I'm finishing the last few logistical things I can think of to get ready to open the preorder tomorrow. I think I've got everything covered and it should run relatively smoothly, but of course you never know with these things and I'm sure issues will pop up along the way!
Posted by Drew at 11:06 AM No comments:

There's been a lot of speculation lately that Blur may play more than a handful of shows that they've already announced in 2013. Yesterday on my Facebook, Twitter, and Tumblr pages, I posted a link from a promoter claiming they've booked shows all over Europe, Asia, Australia, and South America for 2013. It took of like wildfire across the internet, but so far nothing more has been said via official channels (of which that link certainly wasn't).

So hang tight, and as I find any info, I'll be sure to post it to keep everyone informed.

Otherwise, I've just been working like crazy on getting the book finished and the pre-order ready to kick off on Monday the 15th. Busy times, but exciting!
Posted by Drew at 1:11 PM No comments:

Blur has been confirmed to play two festival dates in Spain and Portugal next summer, and these will be the only dates in those countries.

That makes 3 gigs confirmed (also Werchter Festival in Belgium) with strong rumors of Reading/Leeds, Glastonbury, and Coachella also blowing around.

Unfortunately, it looks like my guess of them cherry-picking festival gigs in countries to play to the largest number of fans in the fewest number of gigs has turned out to be right.
Posted by Drew at 8:50 AM 2 comments: