I'm going to be uploading photos of some Blur memorabilia I have to the official Facebook page for Black Book in order to share with all of you. First up, I'm upoading pictures for the tour programmes I have (so far, not many...Blur ones are hard to find). Pictures of the entire 1994 Parklife Tour Programme have been uploaded to Facebook HERE (and if you're not a fan on this page, you should be! I post lots of news and updates here and it's another nice place to discuss things with fans from all over).

If any of you do have Blur tour programmes and would be willing to trade me for them, let me know, as I collect them.
Posted by Drew at 10:21 PM No comments:

An announcement...and a Happy Thanksgiving wish!

For all of you eBook readers out there, the Kindle version of Black Book (which will also work on iPads, iPhones, etc) should be available for purchase ($5.99) in a couple of days.

And to everyone out there, Happy Thanksgiving!
Posted by Drew at 11:24 PM No comments:

Here is Blur's show from the Reading Festival in 1991. This one sounds great, especially for an early show. Very energetic performance, too, warts and all. I've heard from quite a few people that have poor-sounding copies of this, but this one is VERY nice, so I hope you enjoy it. And as always, please leave comments so we can discuss this gig! Enjoy!

Straight from the man himself, Damon stated in an interview that Blur met recently and are planning to convene for new recording sessions in January 2011. This is fantastic news and will hopefully lead to a new album or at least an EP. Let's discuss this!! Please comment, what do you think of this?

A nice review of Black Book 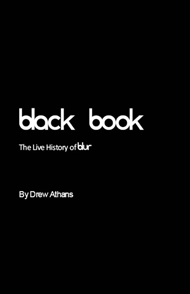 I just discovered yesterday that an excellent music webpage, The Music Slut, reviewed Black Book a couple of weeks ago. This was totally unsolicited (ie I did not contact them asking for a review...I stumbled across this on the web yesterday totally by accident). You can read the review HERE.

Let me know what you think...agree? Disagree? I want to hear from you whether you like the book, just think it's OK, or hate it with a passion!
Posted by Drew at 1:01 PM 2 comments: 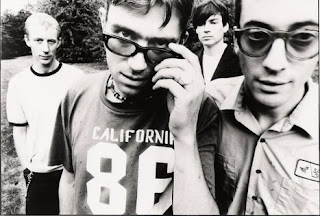 After the yearlong touring of 1999 to promote 13, culminating in the Singles Night Tour in December, Blur for all intents and purposes took the year 2000 off, both in terms of recording and touring. They were invited to play at that year’s Meltdown Festival, put together in 2000 by Scott Walker. In keeping with the tradition to present more artistically challenging material and eschewing the more commercial material (that is, not playing “the hits”), Blur approached this one-off concert in that spirit and presented a set list that is among the most interesting and unique in their career:

Apart from the surprise of opening the show with Battle, there are a lot of goodies tucked into this show. This would be the final time (to date) Battle, Country Sad Ballad Man, Look Inside America, No Distance Left to Run, and On Your Own would ever be played live. Ernold Same, which had been played as a short instrumental between 1994 and 1996, is here presented as the full album version, complete with Ken Livingstone, who did the narration on The Great Escape, joining the band onstage. In my opinion, however, the real treat at this concert is the final song, Black Book. This is the only time the song was ever played in a live concert setting…at the time it was slated to be the band’s one-off non-album single in 2000, but eventually it was released as the b-side to the eventual Music is My Radar single. Still, it’s really nice to hear it here…it’s not as long as the studio version, but that’s ok.

As far as the performance goes, surprisingly, Blur sound very nervous and tentative throughout the show. There are some mix ups, most notably having to restart Beetlebum after it all falls apart. Luckily, there is some light banter onstage, mainly concerning Damon blaming it all on Alex and the cigarettes he smokes! The more obscure songs, which to me are the best parts of the show, are played with intense concentration and perhaps are not as visceral as more comfortable material like On Your Own or This is a Low, but they’re no less interesting. One thing to note throughout the show is how intimate it all feels. It’s truly one of the more “special” shows to listen to.

One last thing that makes this an historic show in Blur's history is that is was the final concert Graham Coxon played with the band until their Reunion Tour in 2009.

Recordings of this show are pretty easy to get a hold of, but if you're having trouble, and enough people are interested, I could always post it.
Posted by Drew at 8:12 AM 10 comments:

Here's Blur's show from Newcastle on their reunion tour of 2009. This is cobbled together from various audience videos of varying quality. In addition, some songs aren't complete...however, this is almost the whole show, and all we have from Newcastle until an audience tape (or a soundboard!) pops up. I still think you'll enjoy it, especially if you were there that night. Enjoy!