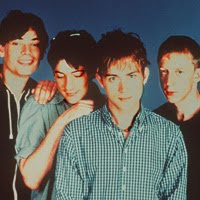 As promised, following the review of the European Spring 1996 tour, I'll now get into the US Winter tour. For some reason, Blur's touring year of 1996 has always intrigued me and remains one of my favorites. While the performances on the whole were uneven (there is seriously not one gig that is consistently excellent from
beginning to end, although some have more high points than others), it's fascinating in that it's the portrait of a band in transition. Tired of the hoopla of 1995, when they won 4 BRIT awards and released another #1 album to great fanfare, as well as their protracted singles battle with Oasis and the revisionist press backlash in the UK, 1996 finds them on the verge of implosion, forced to play the hits that made them famous while looking toward the reinvention of their next album.

The tour dates were as follows (available recordings are highlighted):

As you can see, almost half of the tour is available on recording. I know of the existence of the show at Moe's in Seattle and a complete tape from Portland (the available one is incomplete) ...I'm currently working on getting copies of them all.

Intermission
Popscene
It Could Be You
Charmless Man
Tracy Jacks
End of a Century
To The End
She's So High
Jubilee
Mr. Robinson's Quango
Globe Alone
Advert
Bank Holiday
Supa Shoppa
Country House
Girls & Boys
He Thought Of Cars
Stereotypes
This Is A Low
There's No Other Way
Parklife
The Universal

Interestingly, for the first three shows of this tour, The Great Escape was still being used as the opening number...beginning with the fourth show in San Francisco, it reverted to Intermission, which would remain the opener until the end of the European tour in late March. What's interesting to note is that Entertain Me, which was played during the fall 1995 tours of Europe and Japan, was dropped for this tour, but brought back for the European tour in the Spring. Some gems were thrown in (most notably a rare and only performance of Rednecks at the Dallas show) but overall these shows are notable for the contrast between some brilliant performances and some incredibly lazy ones, often within the same song. Of note was Damon's habit during this period to get very lazy with his vocals, changing lyrics, forgetting them, adlibbing/swearing in the middle of songs, and holding out words to avoid having to finish verses. However, the effect is rather charming...they wanted to blow it all up, but they kept on trying in front of the enthusiastic crowds.

Any show from this tour is a fascinating listen and worth your time. And if you have any of the non-circulating recordings (Atlanta, Portland, Seattle) or any others, please contact me privately!
Posted by Drew at 9:43 AM