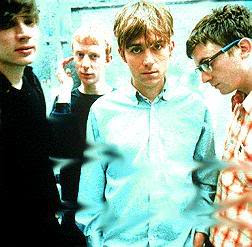 Since this is my blog, I'm going to indulge myself in a little post detailing Blur's escapades in my city, Boston. Boston has a vibrant music scene with loads of local bands (some of which my brother used to be in) and is almost always a stop on any band's tour of the East Coast. In addition, some huge bands hail from the city (Aerosmith, Boston, The Cars, just to name a few). Below is a list of all of the times Blur has played here (available recordings are in bold type):

You can check out Blur's 1996 show in Boston here as I've uploaded it previously. Additionally, I know of the existence of a recording of the September 13, 1997 show (including the soundcheck) and am trying to track it down. I myself was at the 2003 show and can attest to the fact that there is a large and loyal fanbase for Blur here in New England (of which Boston is the unofficial "capital" city of). It's interesting to note, too, that Blur kicked off their tours (1992) or legs of tours (1997 in March) here. They were also scheduled to play the WBCN River Rave in of 2003 (I was going to see them there as well) but they ended up being banned for life from WBCN for pulling out of the gig due to unforeseen circumstances. Damon even mentioned this at the July '03 gig I was at, rather humorously I might add. At least Blur can rest easy...WBCN went defunct this past year!

If you have any memories to share of Blur concerts you've been to in Boston, please comment and share them! And if you have any other recordings, please contact me.
Posted by Drew at 10:34 AM