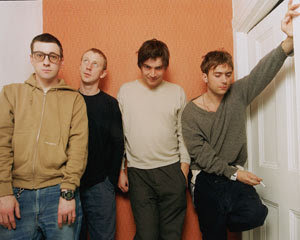 In December of 1999, Blur undertook a short jaunt around the UK they called the "Singles Night Tour," where they played a handful of dates and the set consisted of all of their singles (to date), played in chronological order. The tour dates were (available recordings are in bold font):

I Know
She's So High
There's No Other Way
Bang
Popscene
For Tomorrow
Chemical World
Sunday Sunday
Girls & Boys
To The End
Parklife
End Of A Century
Country House
The Universal
Stereotypes
Charmless Man
Beetlebum
Song 2
On Your Own
M.O.R.
Tender
Coffee & TV
No Distance Left To Run

While these concerts have passed into legend in Blur lore and are a unique part of their history, fan opinion is split. Many fans (myself included) think of it as quirky little tour and the last chance to hear some songs the band absolutely hate and have no intention of ever playing again (Charmless Man, Country House, both brought back in 2009, Bang, I Know). Other fans think the predictability of the set lists made the shows uninteresting and boring. I can see their point, even though I like the shows.

Only the final night at Wembley is available, both in a complete audience recording and a nearly complete soundboard recording patched together from two sources. I find it shocking that more recordings from this tour aren't available...I had heard rumors of a tape of the Brighton show, but so far nothing else has surfaced other than the London show. If anyone out there has some Singles Night shows (or any others) please contact me privately.

What are all of your thoughts on this tour? Comments welcome!
Posted by Drew at 10:29 AM