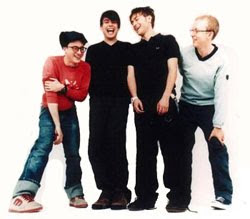 One of the interesting things about Blur touring in 1999 was that in the summer they focused exclusively on festivals, playing probably damn near every available one they could fit in between June and August. Here is the tour itinerary from summer 1999 (available recordings are in bold font):

In addition to the available recordings, I know of the existence of the Heineken Festival, Fuji Rock Festival, Goldsmiths, Reading Festival (complete AUD tape) and Leeds Festival tapes and am in contact with the tapers, trying to get copies, so stay tuned on that.

But what is interesting is that they only played two non-festival gigs: the Point in Dublin, and the Goldsmiths gig (as a warm-up) for the Reading show. While Blur had played loads of festivals in the past and would again in 2003 and 2009, there's nothing quite like the summer of '99 when that's basically ALL they played. The shows overall are solid, although the static set lists got old after a while and it wasn't until the end of the summer that they got away from the routine sets of playing all of 13 followed by some older songs in the encores. By summer's end, they were mixing up the sets, to much better effect.

If you have any of those recordings I'm seeking listed above, please contact me privately!
Posted by Drew at 8:29 AM