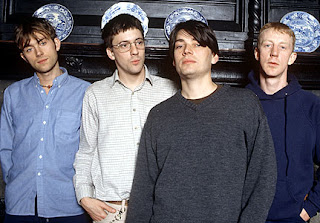 During the transitionary year of 1996, Blur played a short American tour during January and the first half of February (which I will blog about later) before embarking upon a European tour that began at the end of February and ran until the end of March. The tour dates were as follows (available recordings are in bold)

Intermission
Popscene
It Could Be You
Charmless Man
Tracy Jacks
End Of A Century
Coping
To The End
Entertain Me
Jubilee
Mr. Robinson's Quango
Globe Alone
Advert
Supa Shoppa
Country House
My Sharona
Girls & Boys
He Thought Of Cars
Stereotypes
This Is A Low
There's No Other Way
Parklife
The Universal

There are a number of reasons this tour has always intrigued me, not least of all that it is very poorly documented, both in terms of audio recordings and any video (save for some video of the Madrid gig) and photos, etc. Also, the set list is still focused on The Great Escape, although the shows tended to be played more aggressively and sloppily (if that makes sense). Also, the better performances were of the harder, edgier material from that album, like Entertain Me, He Thought of Cars, Stereotypes...pointing the way to the direction the band would take later in the year as they recorded the about-face that was their 5th album (released in early 1997).

I know that a recording of the Hannover and Florence shows exist and am working on tracking them down, but otherwise this tour remains rather a mystery, and I always loved trying to solve a puzzle!
Posted by Drew at 8:06 AM