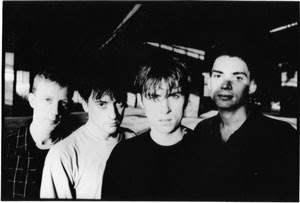 In the spring of 1994, Blur set out on a UK tour to promote the newly released Parklife, which was the turning point in their recording career and catapulted them to superstardom. While a few of the songs from the album had been played live since late 1993, this was the first time most of the album was played live on a regular basis, making up the bulk of the set list.

The tour dates are below (available recordings are in bold font):

About half of the known recordings are readily available. The typical set list was:

The big surprises, of course, are London Loves (which would be dropped after this tour) and Trouble in the Message Centre (which would be played regularly until the end of the year, making its final appearance in Toronto in early 1995 (a show I will review soon).

A great tour in support of a great album...if you have any other recordings from it (Glasgow, Reading, Brighton, Manchester, of the 2nd Shepherd's Bush gig are known to exist), please contact me privately.
Posted by Drew at 10:21 AM