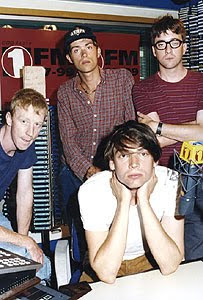 For the first time in a year, Blur toured the USA and Canada in September 1995 to promote their recently released #1 album, The Great Escape. The tour began in late September and ran until mid-October, concentrated mainly in the Northeast, Midwest, and California. The Winter US tour of 1996 took in some locations missed by this tour; thus this 1995 tour can be seen as the first leg of two for their overall USA tour. The tour dates are below (known recordings are in bold font):

Of the available recordings, the only one not in circulation is the Chicago show, although it is definitely known to exist and I hope to uncover it soon. It would also be great to find a show from September.

The Great Escape
Charmless Man
Jubilee
Popscene
End Of A Century
Tracy Jacks
Mr. Robinson's Quango
To The End
Fade Away
It Could Be You
Stereotypes
Supa Shoppa
Girls & Boys
Advert
Bank Holiday
Country House
This Is A Low
He Thought Of Cars
Parklife
Sunday Sunday
Globe Alone
The Universal

As you can see, while no surprises, it's a great mix of songs from every album at the time (apart from Leisure). My favorite show from this tour is the San Francisco one, which has great sound and fantastic playing. I will try to share it with all of you sometime.

So to anyone out there who saw this tour or has heard recordings, what do you think of it? And of course, if you have any recordings from it, please contact me privately.
Posted by Drew at 8:42 AM