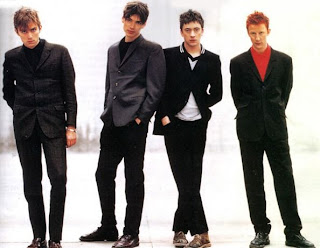 At the end of 1993, Blur undertook a short promotional tour of the USA to promote the recently released (in America) Modern Life is Rubbish. This was a very short tour consisting of the following dates:

The sole recording available from this tour is the Philadelphia show (kindly sent to me by the taper...many thanks!).

The set list was the same as on the preceding UK and European tours of October/November:

No surprises in the set, but judging from the Philly tape, the crowds weren't as into this new British direction (at least at first) as other countries were...Damon has to yell at them to show some enthusiasm about halfway through the show! And they are utterly baffled by Daisy Bell (unsurprising...I don't imagine too many Americans are into English Music Hall!)

Still, it's an interesting little tour and I'd love to hear some other recordings from it...if anyone out there has some, contact me privately.
Posted by Drew at 10:03 AM