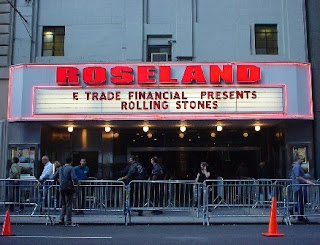 In 1999, Blur surprisingly only played three shows in North America: one in New York City, one in Los Angeles, and one in Toronto. I personally recorded the Toronto gig and have spoken to people who have the other two shows, as well as seen them listed, but thus far they have remained elusive. Here is the setlist for the Toronto show, which would be the same for this one in New York City:

As you can see, it's a typical set list for this point in 1999. What makes this show (and the Los Angeles show two days later, but that's a topic for another post) so desirable is that that was it for Blur in the USA in 1999. Surprisingly, they never came back, and this was the only year (other than 1990 when they were too new, and 2009 when they stuck to the UK, Ireland, and France) they never did a proper tour of the USA. Thus, to have all three of the USA/Canada shows would be very nice in order to fill in this little piece of the concert history for 1999.

So, the hunt continues for this show. However, if you taped it or know someone who did, please contact me privately (your correspondence will, of course, remain confidential).

On a personal note, since I live close to Boston, I'm only about a 4-5 hour drive from New York City. I was a sophomore at university when this show took place and had tickets reserved to buy, with the intention of taking the bus to New York, seeing the show, and then sleeping on the bus overnight back to school. Except that a couple of weeks before the show, a VERY important mid-term exam was scheduled in my chemistry class. Since I was a chemistry major, I had to study and do well in it, thus no Blur show! And it would be four more years before I finally saw them (but again, that's for a future post)...
Posted by Drew at 7:14 AM