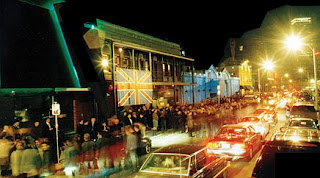 This post is a little self-indulgent, but since this is a blog about the live Blur concert experience, I thought I'd share my own (and sadly only) time that I saw Blur live...in Boston at the Avalon on July 18, 2003.

First, some background. When I heard Blur were going to be playing in Boston, I of course had to go see them. I ordered two tickets, one for me and one for my brother. Horrifyingly, about a week before the show, I still hadn't gotten the tickets in the mail. I called Ticketmaster and they said they had a glitch in their system and no one's tickets had gone out, but that they would soon. I got them the DAY before the show...talk about cutting it close.

The day of the show, my brother and I drove into Boston in the afternoon. We grabbed some dinner, walked around the city a bit, and then made our way over to the (now defunct) Avalon on Landsdowne St and got into the club early. Since it was general admission (and the club probably fit around 500 people), we made our way right up to the front and ended up in the second/third row. The opening band, the Moving Units, were pretty good even though every song of theirs sounded the same after the first few bars. However, when Blur came onstage, the crowd went nuts. I remember Damon was wearing a gray sportcoat over a striped polo shirt and they all looked so cool. They ripped into Ambulance and the set list was as follows:

Ambulance
Beetlebum
Girls & Boys
Gene By Gene
For Tomorrow
Sweet Song
Moroccan Peoples Revolutionary Bowls Club
Tender
Caravan
Out Of Time
Crazy Beat
Brothers And Sisters
To The End
Song 2
Trimm Trabb
Battery in Your Leg
The Universal
ENCORES:
Popscene
On The Way To The Club
We've Got A File On you
This Is A Low

Some things I remember: thinking (along with the people around me) "Oh my God, is Graham back?" when I saw Mike Smith (keyboard/saxophone player) come out (since he had short hair and Graham-style glasses...in the low lighting at a short distance, he was a dead-ringer for Graham); Damon polling the crowd on whether they wanted them to play Good Song or Sweet Song (Sweet Song won); before Out of Time Damon explaining they've been banned from WBCN (Boston radio station) for pulling out of the WBCN River Rave festival earlier in May (a show I had intended to go to to see Blur); the band had a technical glitch before Battery in Your Leg, with Alex playing the basslines to Music is My Radar, She's So High, and On the Way to the Club before they sorted it out; everyone being shocked they played The Universal (it was only the second time they'd played it that tour); Damon jumping onto us a few times during the show (my brother and I got to high-five him); standing next to a fellow from the UK and talking to him after the show about how he had worked on the lighting crew for some of their UK tours in 1994-97; overall, how great a concert it was. Also, on the way out the door, someone was handing out invites/tickets to the afterparty at the Paradise (another Boston club) to random people, my brother and I being two lucky recipients. We debated whether to go or not, but both of us had classes the next day (I was a PhD student at the time and he was an undergraduate) and decided to just head home...a decision I'm sure he regrets now as much as I do!

A few weeks later I was thrilled when someone contacted me with the recording of the show, which they sent to me. Even cooler was that you can hear me on the bootleg...I shouted out "yeah!" really loud in the silence when Damon announced Beetlebum, and you can hear me whoop it up a few times throughout (I must have been standing close to the taper). All in all, a great concert made even better by the fact that I was there!
Posted by Drew at 8:47 AM