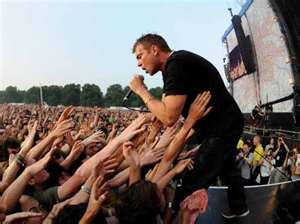 Recently, NME published an article listing its "100 Gigs You Should Have Been At." First, a disclaimer...I haven't read the article myself as it seems to be only in the print edition, and I only read the free online edition. However, it has been discussed on the Blur message boards and apparently only two Blur gigs showed up on the list (three, technically, if you count the fact that they were part of the Rollercoaster Tour package in 1992, but NME only singled that show out because of My Bloody Valentine). The two Blur concerts they mentioned were the Gimme Shelter gig from 1992 (available HERE) and the Hyde Park shows from 2009 (commercially available). That started quite a debate on the forums, and I thought I'd expand on it here. So my question to you fellow fans is:


What do you consider to be the greatest Blur gigs ever?

Let me first say that by asking this question, I'm not talking about which are the best shows necessarily. We all know that, for instance, the Iceland show from late 1996 is a great concert because the band was very relaxed and previewed a lot of new material from their upcoming self-titled album. However, it's not one of those LEGENDARY gigs where everyone wishes they had been there, the way, say Woodstock in 1969 is. In my opinion, not only does the NME not have enough Blur gigs on it, but even if we accept they only get two spots, the two NME listed are, in my opinion, far from the ones any of us hardcore fans *should* have been at. So which gigs do I think would have been better choices for this list? Please note that this list is purely subjective and purely my opinion. Furthermore, I could come up with probably over 20 gigs, but I'm going to try and stick to the ones that even casual Blur fans would probably agree would have been ones they'd have loved to have been at.

That's my list, and I can expand further on my choices if you'd like me to, just ask in the comments. What's your list?
Posted by Drew at 7:16 PM