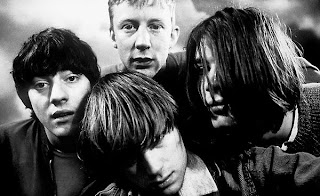 After the disastrous 1992 US tour, Blur returned to the UK bruised, bloody, and bitter. Not making their mood any better was the fact that, while they were away, a new band by the name of Suede had taken the UK scene by storm...by returning rock music to English roots, something Blur had tried (and failed) to do with the release of Popscene prior to leaving for America. Against this backdrop, Blur were clearly not in the best frame of mind when they were invited to participate in the Shelter charity's benefit gig, co-hosted with the NME, entitled Gimme Shelter. On the bill were Blur, Suede, Mega City Four, and 3 1/2 Minutes. Irritated by their lack of success in America and the fact that they were now co-headlining with Suede, Blur began drinking early on the day of the gig. As was recounted in gory detail in 3862 Days, by the time they were due onstage, they were barely able to walk and were in foul moods.

Walking onstage, Damon told the crowd his now famous (infamous?) quote, "We're so shit, you should just fuck off now!" What followed was a gig that was chaotic, sloppy, and wildly exciting. As described in the official biography, the band was barely able to stand and kept crashing into each other and falling to the floor.

Of particular interest are two rarely played songs, Never Clever and Luminous, the former being, at the time, the intended follow-up to Popscene (which was scrapped once Popscene flopped in the charts). Also, as you can see, quite a lot of material slated for the second album was debuted for the UK crowd (some had been played earlier in the year) here, such as Advert, Colin Zeal, Pressure on Julian, Sunday Sunday, and Coping.

I've talked to a fellow who was there and he described the gig as "not very good," while other accounts range from it being awful to strangely enthralling. Some people even described it as the best gig they ever saw! (again, referring to accounts in the official bio). One thing that cannot be disputed is that David Balfe and Andy Ross, the heads of Food Records, were so disgusted that they gave Blur a dressing down the following day and threatened to drop them from the label if anything like this ever happened again. Obviously, as it turned out, Blur cleaned their act, tightened up their performances, and went on to become mega stars within 18 months. This can clearly be seen as their nadir, and their most key turning point, both in their attitude and approach to performing, as well as their work ethic.

For years, a recording of this gig has been a Holy Grail of mine (and other collectors) as all we've ever known of it are secondhand accounts and the passages in 3862 Days. I even did a ton of research on this gig for the No Distance Left to Run documentary, tracking down a fellow who was there, a ticket stub, and articles in NME and Melody Maker. But the material I uncovered was unused in the film because the actual recording remained elusive.

Here, finally, after many years of searching by me, is the complete gig. I won't describe too much other than you can hear the drunkenness loud and clear, and the gig has its moments of being horrible and being quite good. A long and in-depth analysis will be included in the 2nd edition of Black Book, so until the book is complete and available for you to read, you can make your own opinions on this show.

VERY SPECIAL THANKS goes to Ian Rule, who was kind enough to share this recording with me and who agreed to let it be shared with the rest of the Blur fan community...thanks so much, Ian!

PLEASE LEAVE COMMENTS after you've listened to this...I'd love to hear what you all think!
Posted by Drew at 9:44 PM