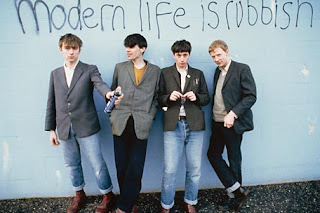 As has been discussed on here, in Black Book, and elsewhere, 1993 was a turning point year for Blur. It was in this year that they harnessed their drunken energy and tightened up their live act, released a classic single (For Tomorrow) and (finally) released their landmark second album, Modern Life is Rubbish. As a touring year, 1993 was surprisingly light for early-era Blur...after a UK tour in the spring, they played some scattered shows in the UK and Europe before returning to proper touring in October.

This tour, called the Sugary Tea tour (after a line in Chemical World) encompassed most of October. The schedule is below, with the known and/or available recordings highlighted:

Unfortunately, I only know of the existence of one recording from this tour, and that is the Bradford show. It would be great to hear more from this tour (if you have any, please contact me privately!). The set list for these shows (based on the Bradford show...if there were changes, I don't know them as the unavailability of recordings doesn't help) was:

A pretty standard set list, without too many surprises, although it is interesting that Come Together was still in the set, as it would be dropped by the European tour which began at the end of the month. Also, a pre-release version of Parklife, which was typical for the time, was included near the end of the set.

This is a somewhat "mythical" tour for the band, based mainly on the fact that, besides the cool name it has, there is hardly anything known about it! I do know that Salad were the support band, but beyond that, it remains a mystery, and as such, it is very interesting. It will take more detective work to bring more tapes to light (if they even exist) and to flesh out the picture of this tour.
Posted by Drew at 1:16 PM