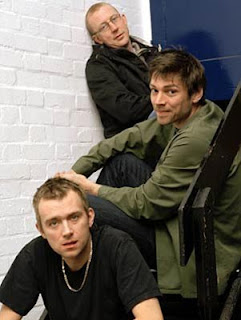 In early 2003, Blur undertook a rather interesting promotional jaunt to promote their forthcoming album Think Tank before it was released. Emerging onto the concert stage for the first time since Graham Coxon's departure from the band, questions surrounded the band and how they would fare onstage. As they came forth and began what would turn out to be a grueling year of touring, they introduced their touring guitarist, Simon Tong, and an expanded live lineup that featured a keyboard player, percussionist, and backing singers.

This tour consisted of a series of shows in scattered locations around the globe, culminating finally with a five-night residency at the Astoria in May when the album was finally released (see HERE). The shows on this tour are below (available recordings are in bold).

As you can see, most of this tour is available for listening. There are some interesting notes to these shows...for one thing, the two US shows in March (Texas and New York) featured a stand-in bass player, "Chris from Brooklyn" (as he was introduced by Damon) because Alex couldn't get his work visa cleared in time to play the shows! Also, for some of these shows, rare songs that wouldn't be played again in 2003 or beyond were tested out, including Top Man (played regularly during this period) and Colin Zeal (played only once). The shows themselves were rather low key with a typical set list of:

Damon can be heard during these shows marveling at the crowd singing along to the new songs weeks before the album has been released...that's the internet for you! All in all these shows offer a fascinating glimpse into a unique and rather uncertain time period for the band before the hit their stride at the Astoria in May and continued on to play anywhere and everywhere throughout the year.

FOR YOUR LISTENING, the New York show has been posted HERE...feel free to download it and have a listen...it's well played and interesting. One of the most unique Blur shows from their career.

If anyone has any recordings of the currently unavailable shows, I'd love to hear them...please contact me privately.
Posted by Drew at 7:18 AM