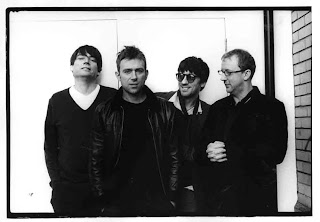 In honoring the one year anniversary of Blur's magical tour from last summer, this review will focus on the shows they played last summer in June and July 2009. After six years of inactivity and no hope among fans they'd ever get back together, Blur reunited in December of 2008 and announced a show at London's Hyde Park on July 3rd, 2009. The response was so great that they added a second show on July 2nd and later expanded it into a full scale tour, including appearances at some major summer festivals, the centerpiece of which was Glastonbury.

The tour dates are below (available recordings highlighted):

Regarding recordings, all of the available shows are complete audience tapes except for the two Hyde Park shows (commercially available as official releases), Glastonbury (taken from the TV broadcast, incomplete), T in the Park (incomplete, taken from TV). The Colchester, Rough Trade, Goldsmiths, and Newcastle gigs are mostly complete and cobbled together from various audience video sources.

The interesting thing about this tour is that the way it was set up was a geographical and chronological summation of Blur's history, starting where they played their first ever gig (in Colchester), moving to where they met up in London (Goldsmiths) and moving on through important places to the band (Wolverhampton, where Smoggy and Stu are from), Manchester, Glastonbury, and leading eventually to Hyde Park for two massive outdoor shows, playing in front of 50,000+ people each night.

The interesting songs are highlighted...sadly, they didn't last long in the set...Colin Zeal was only played on the first night in Colchester, Charmless Man was dropped after Brixton Academy, and Essex Dogs and Battery in Your Leg were dropped after Southend. After those songs were dropped, the set list remained the same throughout the tour, with the exception of T in the Park (more on that later). Death of a Party was added for the Hyde Park shows and remained there throughout the balance of the tour.

One thing that was obvious is that the guys were still on top of their game in terms of their musicianship, turning in top-notch, high-energy performances and conveying onstage they were having a LOT of fun! It's hard not to get misty-eyed listening to The Universal, for example, when spinning the Hyde Park show, or getting pumped up and jumping around during Tracy Jacks...the shows were that good!

The Rough Trade show was a secret show announced on the radio right before the concert, so tickets were hard to come by. The Brixton Academy show was invite-only for family and friends, while the Manchester show was the only arena show on the tour (and funnily enough, the only one that didn't sell out!). After the Hyde Park shows, Blur played a show in France and a massive festival in Ireland, which leads us to their final show in Scotland. The T in the Park show nearly didn't happen, as Graham got food poisoning and was rushed to the hospital hours before the show and nearly didn't make it back. Luckily, he was able to play, although they shortened the set because of this.

Still, all in all, this was a wonderful and magical tour that not only brought Blur's music to their fans once more, but brought together Blur fans from around the world, both at the gigs and online (many of the good friends I've made abroad were due to our online excitement, discussions, and sharing of experiences during last summer)...I think it's safe to say it holds a special place in the hearts of MANY Blur fans for a variety of reasons, all of them positive!

I'd love to hear a complete Glastonbury or some audience tapes of the shows that are only available from poor quality audience video...not only would it be very enjoyable, but it would help flesh out the story of this tour more. If you have any or know someone who does, let me know privately!

In the meantime, keep enjoying the music and the memories...I know I will!

And I will try to get the Southend show up this weekend...in the meantime, the Glastonbury show is HERE.
Posted by Drew at 7:07 AM