REVIEW: Under the Westway/The Puritan single 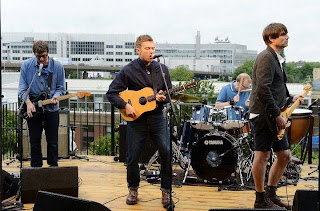 Now that the dust has settled a bit, I thought I'd write a quick review of the new Blur single, Under the Westway b/w The Puritan. Having listened to the first acoustic live performances (Westway from February with Graham and Damon, The Puritan by solo Damon in June), the live performances from the webcast, and the released studio versions, I've got a good impression of the songs in a few different settings.

First, Under the Westway: it starts off with what sounds like some heavily echoed drums before the piano and guitar riff take us into the actual song. It's a classic Damon piano ballad that could be the lovechild of Best Days and Battery in Your Leg. Damon's vocal is delivered with nice emotion and his voice sounds a bit weathered by age and cigarettes and is really powerful and clear, nailing all of the notes with ease. The harmonies with Graham near the end are beautiful and it's a really evocative piece.

As for The Puritan, it was the one I was less excited about after hearing the first acoustic performance, but at this point I think I like it a bit more. Again, it's lead-in is a synth riff before the band kicks in.  Here, the lyrics are less poignant and more aggressive and biting, the song having been written as a response to the backlash Blur got for being rather authentic at their Brit Awards performance amongst the rest of the manufactured music at the pre-packaged event. It's a catchy song that picks up steam and energy as it chugs along to the fade-out "la la la" sing along chorus.

While both songs are very good, I must say that of the 3 new songs we've gotten from Blur since 2003, I still prefer Fool's Day over these. The new single's production is good but I feel it could be better...the mixes feel a bit cluttered to me, especially on The Puritan; it just sounds too busy in the background to my ears. I'm saddedned by the fact that Alex's bass parts are little more than root notes; he's capable of so much more than that, and as he's one of my favorite bass players of all time (and in my opinion, one of the best), I wonder whether this is what he was told to play or all he could be arsed to come up with. My biggest gripe for both songs is the drum sound/production. On both songs, Dave's drums are produced to the point that they sound like little more than click tracks. If you listen to the live versions from the rooftop gig, his drums really sound great and he wails toward the end of The Puritan. On the recorded versions, it very well may be a click track for all I know, and if not, it's a damn shame that they were processed that way.

Finally, perhaps it's a more nitpicking complaint, but neither of these songs (or Fool's Day, for that matter) have choruses. Whether that's lazy writing or just Damon's new style, I don't know, but where the choruses should be are instead short instrumental bursts that leave me longing for a hook. I got (mildly) slapped down by Graham for bringing this up on the official forum, but I stand by this one gripe 100%. Just because I'm a diehard fan doesn't mean I won't stand by my opinion when it's slightly negative and this is one case where I won't be swayed otherwise.

While I really enjoy these songs and I've been humming them and playing them non-stop since Tuesday, some part of me feels like at best, they'd be solid album tracks or B-sides if Blur were to actually make a new album, and aren't necessarily smash hit-single material. However, that being said, mid-tier Blur material is still very welcome and much better than 95% of the dreck that's markerted as music these days. I'm sure if/when these are played in August on Blur's mini-tour, I'll grow to love them even more. If I had to give it a rating, it'd be a solid 7/10.

What do you think of the new songs? Feel free to leave your reviews/comments below!
Posted by Drew at 8:25 AM