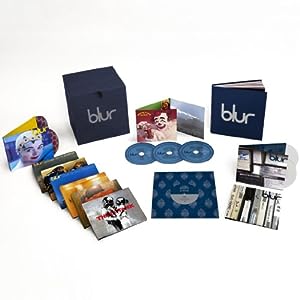 The big announcement from Blur yesterday was the release of Blur21, which is a massive 22-disc career retrospective box set containing remastered expanded editions of all of the albums, three DVDs containing live footage (Showtime, Singles Night, etc), discs of rarities and demos, a 45 of Superman, and a book detailing the band's history.  A vinyl box set containing all 7 albums on vinyl will also be released, as well as individual versions of the remastered albums. 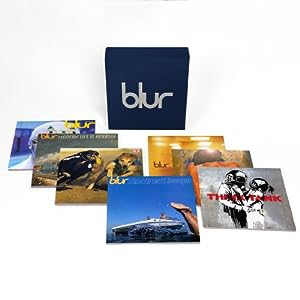 I've personally already pre-ordered the deluxe 22-disc box set...while I have a lot of the rare stuff, the demos alone make it worth it to me, as well as the fact that I'd buy anything they released :-).  They can be pre-ordered at Amazon.co.uk, although I've noticed the price has TRIPLED in just the 24 hours since I ordered it...it's a limited edition so my advice is, if you're interested, pre-order ASAP!

This raises an interesting question, though. Many fans believe this is just a nice release and that we can still expect a new album and tour from Blur, but to me this screams "wrapping up the career." Bands don't typically release career retrospective sets where they empty out (just about) everything from the vaults. In addition, Damon has stated in numerous interviews since the Brits award in February that the Hyde Park Olympics gig will be the last show ever, Under the Westway will be "a nice little coda" for the band, and that he can still make music with Graham but not "the other two."  It all adds up, in my mind, to a nice and graceful farewell for Blur after this August's shows.

And honestly, I'm not only happy with that, but I actually hope it is the case. With as good as the vibe and the momentum was in 2009, if they couldn't make new music then, I just don't see how they will now. The overall mood within the band seems to be rather down, at least judging from recent interviews with them (individually, of course), and after the excitement of the Brits award performance and the promise of big announcements in terms of shows and releases, we got nothing until last night. Of course, the news of the Blur21 release is very welcome, but offering no *NEW* music, instead packaging up all of the old stuff...well, I see this as a nice exclamation point at the end of the Blur story as the curtain gracefully and classily (is that a word?) draws to a close and we all move on.