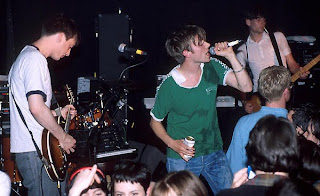 One thing we Blur fans know very well is the wealth of material Blur have given us on the b-sides of their singles throughout their career. There are loads of amazing tracks on the b-sides, and you could definitely make at least a couple of album's worth of discs just using the very best songs. Since many of these songs rank as some of the fan's favorites, I thought it'd be interesting to look at how often Blur performed any of their b-sides in concert, and which songs. While the b-sides performed were detailed in Black Book corresponding to whichever show they were played at, this little article will aim to take a more general overview of the b-sides in a live setting.

First, below is a list of all of Blur's b-sides, along with the ones that were actually played live (highlighted in BOLD font):

***NOTE that b-sides that were also album tracks have been removed, as have remixes or alternate versions***

Down
Inertia
Mr Briggs
I'm All Over
Won't Do It
Day Upon Day
Explain
Luminous
Berserk
Uncle Love
Mace
Badgeman Brown
I'm Fine
Garden Central
Headist/Into Another
Hanging Over
Peach
Bone Bag
When The Cows Come Home
Beachcoma
Young & Lovely
Es Scmecht
My Ark
Maggie May
Never Clever
Dizzy
Fried
Shimmer
Long Legged
Mixed Up
Tell Me Tell Me
Daisy Bell
Let's All Go Down The Strand
Magpie
Anniversary Waltz
People In Europe
Peter Panic
Threadneedle Street
Got Yer!
Beard
Supa Shoppa
Theme From An Imaginary Film
Rednecks
Alex's Song
One Born Every Minute
Ultranol
No Monsters In Me
The Man Who Left Himself
Tame
Ludwig
The Horrors
A Song
St. Louis
All Your Life
A Spell For Money
Woodpigeon Song
Dancehall
Bustin' & Dronin'
Get Out of Cities
Polished Stone
Swallows in the Heatwave
All We Want
French Song
So You
Beagle 2
Black Book
7 Days
Money Makes Me Crazy
Tune 2
Don't Be
The Outsider
Morricone

As you can see, the lion's share of the b-sides played come from the early part of Blur's career (pre-1994 and Parklife). Indeed, during this period they played a lot of b-sides live,as many of the b-sides were originally intended as album tracks before being bumped onto the singles. After superstardom in 1994, the b-sides played became more sporadic, and in actuality the list is a bit misleading as the majority of the later b-sides were only played at the legendary one-off B-Sides concert in London in September 1999. Apart from Swallows in the Heatwave and Inertia in 1997 and Fried in 1999, Blur's set has remained devoid of b-sides since 1994 (apart from Supa Shoppa, which was played virtually non-stop during the mad BritPop/Blurmania period of '94-'96). As I recently posted on the official Facebook page, it would be great to hear some b-sides played if/when Blur ever tour again, just to flesh out the set and throw a bone to the longtime fans who know these songs as well, if not better, than any of the singles and album tracks.

To finish up, I'll list my favorite b-sides, in no particular order (if I've forgotten any, I'll add them as I remember). Please share with us your own favorites in the comments section!

What a killer album or two those songs could make...better than most bands' album tracks!
Posted by Drew at 9:55 PM