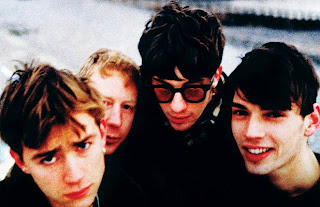 As they did nearly every summer of their career, Blur toured during the summer of 1994 playing mainly festivals. Only, for the first time in their career, 1994 saw them as the headliner, playing in front of massive crowds due to the massive and overarching popularity of Parklife and its singles. The high point was the massive and legendary performance at Glastonbury (see HERE and HERE).

For the summer, Blur played the following festivals (available recordings are in bold):

Of the known recordings, all are available except for the Old Trout, Windsor show (which was a warm-up for Glasto) and the T in the Park show, both of which I am trying to track down. It'd be great if we could get copies of the other shows to fill out the summer's shows (if you have any recordings, please contact me privately). No surprises in the set lists, which all followed the same basic pattern:

The Hultsfred show had the band adding in a Swedish song called "The Frog Song" which is quite humorous to hear (I'll try to post it at a later date), while we all know about the legend of Glastonbury where they ended the show with an epic This is a Low as the sun was setting. When listening to these shows, you can hear how heady it all was for the band, as the crowd response is absolutely insane...it's a constant wall of cheering and singing along. Another thing to note, however, are Damon's rather annoying mockney stylings anytime he talks to the crowd between songs. All part of the image of the day, for sure, but it does get grating to listen to. But it's the music that counts, and these shows are some great ones, played with visceral energy and abandon, but still very tight and focused (download and listen to the Glastonbury show linked to above to hear it in pristine soundboard quality).


As an aside, this will be the last post for a while (2-3 weeks, probably) apart from maybe a show or two, while I undergo and recover from some minor surgery...but I'll still check in to banter back and forth in the comments section, so please leave comments and feedback!
Posted by Drew at 6:50 AM